Life is good for these cats and dogs who have been ADOPTED!
Let’s celebrate Princess Olympia, Goldfish, Robin Lee, Abigail and Buddy! 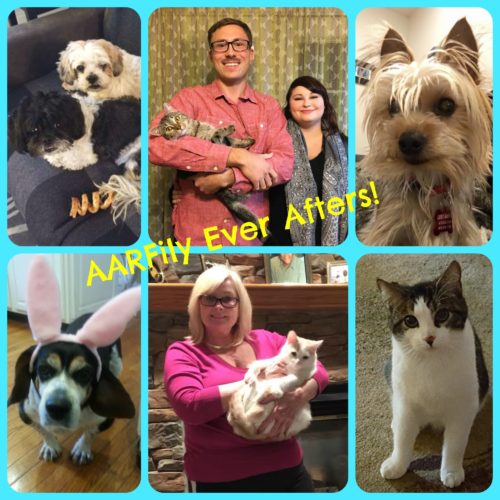 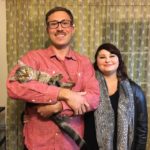 Princess Olympia was found with a rubber band tied around her rear leg. It was so tightly wrapped that her Achilles tendon was severed. The Franky Fund at BARCS took care of her complicated surgery and AARF handled her after-care and recovery. Princess Olympia was one of several horrific rubber band abuse cases that came into the shelter over a short period. Because of wonderful volunteers and sponsors, we were able to help this sweet kitty fully recover and find a safe home to call her own!

Princess Olympia has put the past behind her and is now enjoying life being an only pet– and a spoiled one at that! Her adopters kept her name and they love to use her full name in public. We are so happy that she made it through her difficult journey and has found her AARFily Ever After! 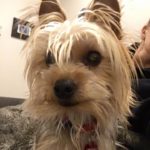 This 3-year-old Silky Terrier named Chloe was very nervous living at a local shelter. She was part of an abuse investigation with several other dogs that were seized from a Baltimore home. Chloe joined our rescue and was given lots of TLC by foster mom, Betsy. This lucky pup now lives with her new owner, Carole, who we hear spoils her royally! Chloe gets to go everywhere with her on adventures and enjoys every dog she meets. She is still shy when meeting people but quickly warms up to them. 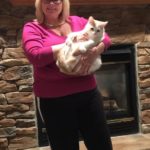 Goldfish, now named Butterbeans, was found on the side of the road in Harford County. This little cutie was only 8 weeks old and oh so very skinny and covered in fleas! Not to worry – he went into foster care with Sarah and was as good as new! Butterbeans now lives with his new mom, Cathy, and we are told that he is doing great and enjoying his Golden Retriever brother named Maxx. “Butterbeans has settled in perfectly well and is so happy. It is like he was always a member of my family. I don’t know how I ever woke up without this beautiful baby boy giving my nose kisses with his little pink nose,” Cathy shared. 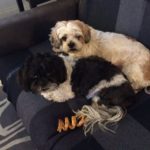 Robin Lee was found as a stray and taken to BARCS by the finder. This senior gal had lots of fleas and fur so heavily matted that she needed to be groomed in order to go to the bathroom! She also had a cherry eye and was missing all her lower incisors. AARF gave Robin Lee the medical attention she needed as well as the love she deserved while in her foster home… and pretty soon she found her forever home with Nathalie! Her name is now Gigi and she has a doggie sibling named Gala. Nathalie shared that “Gigi is very sweet and demands affection. She loves her toys and always tries to sneak one out on her walks…which doesn’t really work once outside because she forgets about it!” 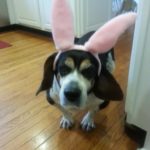 Abigail was surrendered to the shelter in October 2014 along with another dog because the owner didn’t want them anymore. Abigail was miserable at the shelter and weighed 51 whopping pounds! She should have weighed about 25-30 lbs. She was so sad that she didn’t even want to get up to move around, so just laid her head down in her crate all day long. This sweet Beagle/Basset Hound mix pup also had severe arthritis and was put on several medications to assist with the pain she was experiencing.

AARF foster, Krystal, took her in and helped her to start losing weight and learn how to be a happy, mobile dog once again. She was adopted but then returned 9 months later because the owner was moving. Foster mom, Minta, knew that 11 year old Abigail would one day find the home she deserved and patiently waited for the right family to come along. The day finally came and we were delighted when Lauren and her family applied for her! Lauren told us that “We are thrilled to have adopted Abigail. She has been so wonderful and she is by far the sweetest dog I have ever met! Abigail loves to ride in her stroller and has even been taking some stairs! She is walking pretty well and got a clean bill of health from the vet. We are so happy to have Abigail to complete our family.” 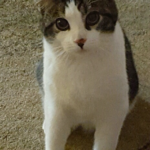 Buddy was born outside to a young cat named Babe. Babe had two kittens before AARF volunteer Mary Beth could trap and have her spayed. Buddy and his sister were lucky that their momma chose to make a home near a rescuer’s house! Ronda adopted Buddy and tells us “He bats anything and everything he can get his paws on. I think he would make an excellent soccer player for the Olympics.” Buddy is now named Kagney and is loving his secure and safe home. “Every day I am so grateful Kagney has come into my life. He continues to entertain me with his antics and he is so darn cute and lovable. I embrace his kitten-like behavior and am so glad he no longer wanders the streets of Baltimore unloved,” Ronda shared.

A big CONGRATS to all the animals who have been adopted and a big THANK YOU to those who continue to work tirelessly to help find adoptive homes for these deserving cats and dogs! WOOF WOOF and MEOW!