CONGRATULATIONS to some pups and kitties who have been ADOPTED! We are thrilled to be able to share these rescue stories with you and hope we can inspire people to continue to help these deserving animals find forever homes. 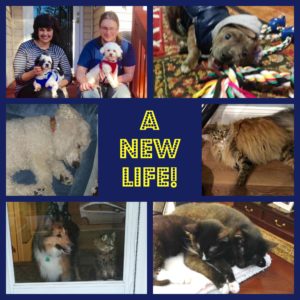 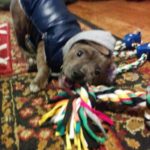 EBENEZER was only eight weeks old when he was dropped off at a local shelter along with his mom and two siblings. This sweet Dachshund mix puppy and his family were fostered by AARF volunteer Lauren, where they grew stronger each day until they were ready for forever homes. Lauren’s friend Ashley fell for Ebenezer and adopted him! Ashley renamed him Bucky after her grandfather, whose nickname was Buck. She tells us that Bucky likes to play with his stuffedhippo and take naps on the couch. “He is very friendly and has been busy making new doggy friends,” she added. 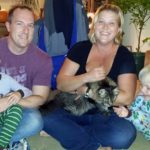 JAXSON was about one year old and very friendly when he was found by Diane as a stray in Baltimore. She fostered him until the purrfect family came along. He is now living a wonderful life and is very spoiled. His new mom Lee shared “It turns out he is one remarkable cat. He has become the family protector. Before our dog Phoenix passed away, Jaxson was always keeping an eye on her. Unbeknownst to us, she had a brain tumor, and Jaxson was her constant companion. On the day she died, she began having seizures, but she had hidden from me before they started. Jaxson came and alerted me that there was something wrong and took me to her. Since her death, he has been greeting us at the door (just like a dog), and guarding our two boys every night. Our son has a strange disorder that wakes him from a dead sleep with dizziness and often vomiting, and if Jaxson senses an episode coming, he wakes me up and takes me to him.” Lee added that “I will be forever grateful for you all for bringing us together and to Diane for rescuing and fostering him.” 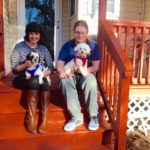 RescueWell contacted us to help HARLEY and SARAH find a new home together since their owner passed away and family members couldn’t keep them. They went into foster care with Jan and Karen and before long, were moving into their forever home with Maureen! “Sarah and Harley are doing great! I have kept their names since they were older pets and they were used to them. They are the most adorable and loving dogs. I am so grateful to have them in my life. They are very affectionate, love to give kisses and love to cuddle while sitting on the couch with me. I am so happy I found them and they found me!” Maureen told us. 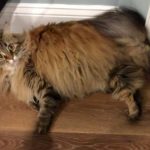 HERSHEY had been getting groomed every four weeks at Highland Groomery by Wanda, but unfortunately her owner was elderly and became very ill. Wanda, who is one of our star fosters, was asked by the owner’s son if she could help find a new home for Hershey. YES was the answer and she became an AARF cat. This three year old lucky kitty was adopted by Holly and we are happy to report that she has adjusted well to her forever home. 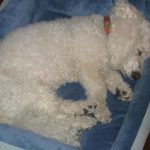 Sweet eleven year old senior pup TEDDY BEAR was surrendered to BARCS by his owners because they were buying a puppy and could not take care of two dogs. Teddy Bear came to us with flea dirt, dermatitis, cataracts in both eyes and dental tartar. His loving nature and friendliness helped him find a home quickly and he is enjoying living out his years in a wonderful new home. Rose tells us that he is a good dog and that he seems very healthy for his age. “Everyone who meets him says how cute he is and how soft he is. When he comes in from outside he prances and runs around. He reminds me of those little goats you see in videos who jump,” she told us. 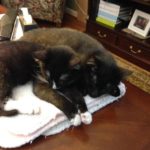 Bonded babies, LINUS and CHARLIE BROWN, were once on the “urgent” list at BCAS…fast forward to a fantastic life ahead! Fosters Wanda and Belinda fabulously prepped the little cuties, and when a nice family went to meet another bonded kitten pair, they wound up falling for these two instead! Mary and her family have renamed them Tuxedo and Taz. Both kitties have integrated quite well into their menagerie of animals — all rescues — two Dobie/Lab mix siblings and two adult cats. We are told that Tuxedo and Taz are very sweet and real people cats. Mary shared that “They like to be where their people are (usually on my desk) and are enjoying being with all of the other animals in the sun spots during the day.”

To find YOUR new fur-ever family member, please visit our website and browse our wonderful dogs and cats available for adoption!