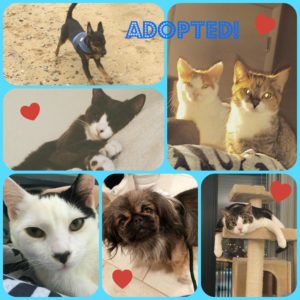 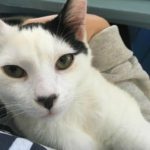 Mighty Mouse was two months old when he joined our rescue from a local shelter. He was sick and required some TLC from foster mom, Helen, before he was ready for adoption. Now this sweet kitty is living the good life and is named Mowgli. We hear that he enjoys his Yellow Lab sibling and likes to look through the glass door to keep up on all the action outside. His mom, Shelley, shared that “He loves when the shower is running. If he can get into the bathroom, he sits in between the shower curtain and liner. We just are in love with Mowgli – he is the perfect addition to our family.” 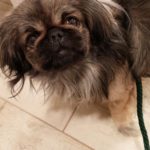 A Pekingese named Buddy Dean, now Min Chow, was found as a stray and wound up at a local shelter. He was fostered by Barbra who then adopted him! Barbra tells us that “We are so happy to have adopted Buddy Dean. He is a wonderful dog. He just loves my other dogs and he fast became one of the guys. Thank you to Jan and Jamie for all their support with adopting him.” 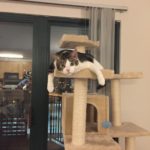 This 9-year-old cat named Eddie came to AARF because his owner lost her home and couldn’t keep him. He was in foster for quite a while to see if the owner could get back on her feet but unfortunately she could not. Eddie found his forever home with Desiree and we understand that he couldn’t be happier! “Eddie has been great and we’re super glad we adopted him. Eddie’s favorite things to do are lounging around in the cat tree, playing with the many catnip toys, finding boxes to sit in, and just hanging out with us wherever we are in the apartment,” Desiree shared. AARF is thrilled that he found such a great home and was given another chance for a meow-velous life! 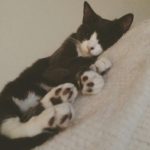 Peekaboo was only 5-weeks-old when she and her litter mate were found orphaned and then taken to BCAS. They joined our rescue and into the caring arms of foster mom, Wanda. James and Jenn adopted Peekaboo and tell us that she is doing “awesome!” They renamed her Bailey and apparently she likes tinfoil balls! She likes to bat them around and carry them with her wherever she goes. “She sleeps with us every night, usually taking my space on the bed, and greets us at the door when we come home. We couldn’t have asked for a better experience with her,” James told us. 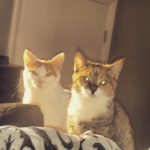 Mary Jane and Butterscotch were 4-month-old feral kittens who were lucky to get the chance to be saved from living a hard life outdoors. Volunteers Christine and Wanda worked together to help tame these kittens so they could have a better life — and yes, they now have a wonderful life with adopter Sara and her family! Butterscotch has been renamed Mila and Sara tells us that she likes jumping on everything and teasing the dog. She enjoys getting stuck in places like a spaghetti colander or behind the fireplace screen! Mary Jane loves boxes and baby food and the spinning feather is her favorite toy. “We love them to pieces!” Sara told us. 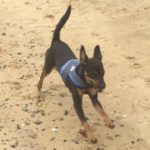 Cecil, a 2-year-old Miniature Pinscher, was dropped off at a Towson boarding facility and the owners never returned to get him. He spent four months there until we were contacted. His past is now behind him and he is treated like a king by adopters Carrie and Peter, who call him Caesar. Carrie tells us that “We love Caesar so much, it’s hard to put it into words!  He’s actually the sweetest, cutest, most cunning little doggie I’ve ever met, and we love him even more for it! My husband, Peter, gives this dog so many kisses and hugs I just melt inside every day. Peter lost two 15-year-old dogs in October 2015. Caesar has warmed Peter’s heart and he loves him beyond explanation. We are lucky we found him!”

We thank the people who took the leap to adopt, as well as those who have helped along the way to care for and find these deserving animals new homes and happy lives!