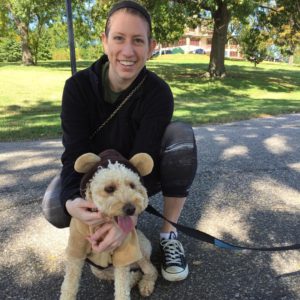 Today’s spotlight is on Jess Gill, our Communications Manager! During the spotlight, we ask a different board member and lead volunteer the same five questions to learn more about them and how they became involved with rescue and AARF.

If you follow AARF on Facebook, you should very familiar with Jess’s work! We all take social media for granted because it’s so easy for us to access our favorite sites, memes, and gifs at the touch of a button. But the truth is really good social media campaigns are a concerted effort and take a lot of planning and forethought. Jess does this all as a volunteer in addition to adding new ideas to AARF’s repertoire of adoption and engagement events. Thank you Jess!

What was your first pet? A German Shepherd named Gingi. He was unfailingly patient with me as I was a super active kid and I would chase him around, jump on him, etc. Despite all that, he still adored me, which is good because it was a mutual love-fest.

How did you get involved in rescue? I think it was kind of always a given. My stepdad has a habit of bringing home stray cats, which my mother is never a fan of – I think all six cats that we lived with were found strays. When I was finally in a place to have a pet, I adopted a cat and I made a point of donating to local animal rescues. But I didn’t think of doing anything more until I was walking into a house one night and saw a fluffy gray kitty sort of limping past me. I didn’t know what happened, but it was very clear that something was wrong. She collapsed in the alleyway near the house and deteriorated quickly despite any food or care we tried to administer. By the time we got to Pet ER, she was already gone. I didn’t know if she had been hit by a car or if someone kicked her, and I decided I wanted to do more for animals in Baltimore, however I could.

What drew you to AARF? It was kind of random – I knew someone who volunteered with AARF and she knew I wanted to get more involved with a rescue after what happened with the gray kitten. She said it was a great organization so I signed up, not really knowing anything about it or what I would be able to do for the organization. I started off as a bio writer and quickly fell in love with how dedicated all the volunteers are to AARF and our rescues.

What’s your favorite thing about AARF? How open they are to trying new things or taking suggestions. Many organizations rely on their board to make things happen and organize events and more. AARF is completely supportive of all its volunteers, no matter how new they might be, and they encourage creativity. In the little more than two years I’ve been involved I’ve been able to say “Hey, what do you think of this?” and they say, “Go for it!”  I’ve been able to do some really cool things, such as organize a kitten party, coordinate a yoga class with cats, and revamp our social media strategy entirely. It’s a rare organization that is willing to try anything and really stand behind their volunteers. It also helps keeps things fresh because we’re always trying new things, which is a great way to engage current volunteers and draw new ones!

Where do you want to see AARF go? I think we’re doing a tremendous job of tapping into local resources to promote our rescues and find them homes – and we should absolutely continue to expand on that. Our community is our biggest partner. We also have a few volunteers that go into schools around the city to talk about animal welfare and help young children understand what it means to be an advocate for animals. I would love to see AARF continue to expand that area of outreach and education!