AARFIly Ever After: Pudge, Wallflower, Lucky, Wally, Moe and Eggnog 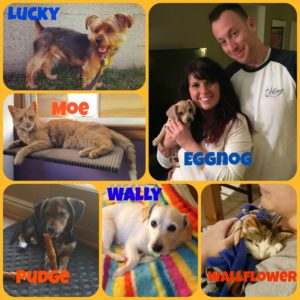 RESCUED + ADOPTED = AARFily Ever After! That’s what happened to Pudge, Wallflower, Lucky, Wally, Moe and Eggnog! Read their stories and help us celebrate!

Four-month old PUDGE came to AARF after his owner could not care for him.

He was fostered by Kim and was quickly adopted by Gina, who named him Boh. Gina tells us that “Boh is such a cuddle bug! The only way he wants to sleep is directly on your neck (which we think may be the cutest thing ever). Also – this boy LOVES children! Our nephews came over a couple of days after we adopted him, and the moment they walked in the door, Boh was obsessed. He ran all over the house, brought them his toys, and kissed their faces! He is the most perfect addition to our family!”

WALLFLOWER was a feral kitten found stuck between two walls. She was taken to a local shelter to make sure she was okay, then found herself being cared for by Magic Wanda. This sweet kitten was adopted and now lives in her forever home with Jackie and family. Jackie’s 5-year-old son renamed her Winnie and we are told that she is a wonderful addition to the family! “We recently lost my sweet kitty so it was hard at first thinking of bringing in another cat, but I’m so glad we did! It did not take her long to fit into the family. She loves to lay on my chest and nibble my chin and ear. She has the loudest purr for being such a little thing! She is feisty and loving all at the same time! I love her to the moon and back and cannot imagine my life without her in it!” 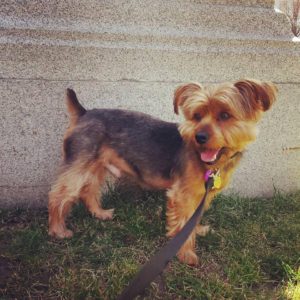 This Yorkshire Terrier mix pup named LUCKY wasn’t feeling very lucky when he was surrendered to BARCS by his owner. He joined our rescue because the shelter had no more room, and fortunately we had a new foster available to take him. Rathi did a great job with this shy little guy and fell in love with him – so much so that she adopted him! She shared with us that “Lucky is doing wonderfully. He’s been a great companion and loves meeting my friends and family. He has been so easy to care for. This has definitely been one of the best experiences of last year for me, and I couldn’t be more grateful to have him in my life.” 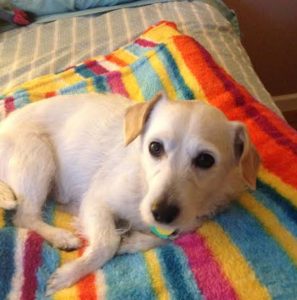 WALLY was surrendered to us because his previous owner went into hospice and he was left in the backyard. The neighbor was feeding him and visiting every day but knew that Wally needed to find a new home. We were told that he lived on the screened-in porch for about four years. Wally now is an indoor dog and is enjoying living with his new mom, Eileen. She tells us that his favorite things to do are to chase a ball and lay on the couch. They walk together and are really enjoying each other’s company. Eileen told us “He seems happy– I know I’m happy. He is a wonderful sturdy little dog. I look forward to many many years with him and many many miles of walking.” 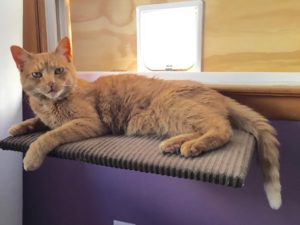 MOE was taken to a local shelter along with many other cats from a hoarding case. He was on the list to be euthanized but a few AARF angels rallied to give him a second chance and save his life. He was fostered by Michelle who shared “He acclimated so well and so quickly to my dogs and cats and he became super bonded to me. I knew he wouldn’t do well at adoption events and I had fallen in love with him…. so I made the decision to adopt him. We’ve had some bumps along the road, but he is so sweet. I could never give up on him. He has an intestinal issue which was diagnosed in October, but besides wanting to eat many times a day, he is doing great. He has three dog sisters and two cat brothers and he does great with my foster cats too. He’s a wonderful addition to our family!” 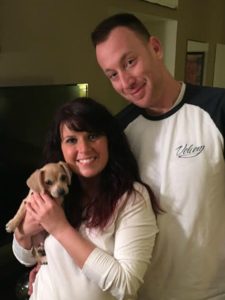 This 8-week old puppy named EGGNOG was brought into a local shelter along with his mom and two siblings because the owner didn’t want to care for them. AARF foster Lauren jumped in with both feet and took care of this family until they were all adopted. Brandi adopted Eggnog and now calls him Pablo. “We are so happy with our new addition to our family. He’s been wonderful and has made great friends with our cat Chloe. They play a lot together. She likes to get in her play box and hide from him till he finds her – it’s so cute. We are having so much fun with him – he’s so adorable; everyone in the neighborhood can’t get enough of him and we have made lots of new friends. Thank you so much for the opportunity to give Pablo a wonderful home,” Brandi shared in an email.

Thank you for reading their stories! If you would like to volunteer with us and get involved, we would LOVE to have you! Please visit www.animalalliesrescue.org for more information.