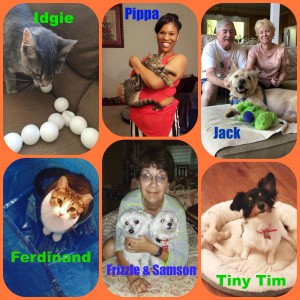 It’s time to CELEBRATE some AARF adoptions! These pups and kitties are in their forever homes and doing well thanks to the efforts of volunteers! We hope you enjoy reading their stories and AARFily Ever Afters… 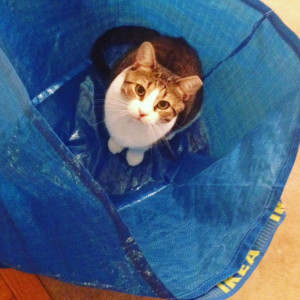 Ferdinand was found as a stray and taken to BARCS. He was acting out at the shelter and was only able to go to rescue due to his behavior, so Sarah took him in and he became an AARF cat. His luck continued and Ferdinand was adopted by Amanda. She told us that “Ferdi is fitting in wonderfully! He’s got his daily routine down and always cracks me up during play time. He’s getting along well with Cinnabun, my house rabbit. Ferdi is a wonderful addition to the house and I love having him as a companion. I couldn’t have asked for a better cat! Thank you so much!”

Idgie was only nine days old when she was found as a stray and taken to a local animal shelter. Our wonderful foster Tracy took her in and cared for her until she was strong and old enough to be adopted. Her adopter Bridget shared that “Idgie, now named Cassie, has settled in very well with me! It’s just the two of us, but I think she likes being the center of attention. Cassie loves, and I mean LOVES, ping-pong balls. She especially loves playing with them in the kitchen and the bathtub. Despite the shenanigans she gets into (as kittens do), I’m so thankful to AARF for bringing me and Cassie together!”

Frizzle was picked up by a Good Samaritan who saw him running around in city traffic. 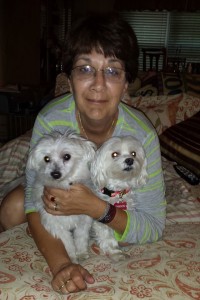 AARF foster Kim took him in until an angel named Marie appeared! You see, Frizzle received lots of applications when he came to our rescue and was believed to be a 5 year old Miniature Poodle. When we found out he was actually a 10 year old maltese with health issues, the interest stopped.

Marie recently lost her 15 year old Maltese and decided she wanted to help another senior dog live out their last years in comfort and happiness. We were thrilled when she decided to adopt Frizzle as well as another senior AARF pup named Samson! Samson, a 9 year old Maltese, had been surrendered by his owner who no longer could take care of him. It is so wonderful to find such amazing people like Marie who give these senior pups a real second chance at a life they deserve. Thank you, Marie, from the bottom of our hearts! 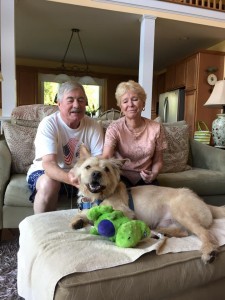 Jack was originally bought as a puppy by a college student who couldn’t keep him in her dorm, so her grandfather took him. The grandfather ended up finding a new home for Jack, which is where he had been for the past 4 years. He joined our rescue because he was not doing well with the couples’ baby and they felt that re-homing him was the best option for their family. Veronica and Caleb, AARF volunteers, cared for the “full of personality” Cairn Terrier mix pup until he found his forever family.

Jack now has a new mom and dad and they tell us “He loves visitors and is happy to see everyone. He just wants to play. When we walk him and pass yards with Lab sized dogs barking and charging the fences, he ignores them.” Adopters Ann and Steve also shared that “He has made friends with the mail carrier and he leaves him treats in the mail box…2 bones. When he sees us walking, he will stop his truck and get out to give Jack his treats and pet him.”  We are so happy that Jack has found a new home and we hope he has a long and happy life with them.

Pippa came to AARF through RescueWell. She was 10 weeks old when she went to her foster home with Tracy. It wasn’t long though until she was adopted by first time kitty mom, Felicia. Felicia was very excited to adopt Pippa and had everything a kitten could want waiting for her on adoption day. Felicia told us that “She is doing great and she is a really cool climber. She really is interested in going outside because she sits at the door and watches the birds when the curtains are open. It’s a joy having her and she is a good listener. We want to thank you guys very much.”

Tiny Tim was a stray who decided to follow a lady while she was walking her dog. She felt so bad for him since he was extremely skinny and was very hungry, so she took him to BARCS. Tiny Tim joined our rescue and lived with foster mom, Tracy, who helped him gain weight and become healthier for his 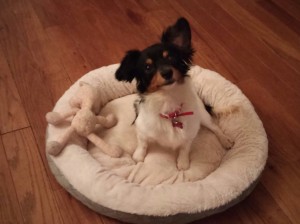 new family. This sweet pup is now named Bertie and loving his forever home with his new mom, Rachel. She tells us that “He now weighs 10.4 lbs and is doing well. He is learning some basic commands and relishes training treats. He loves to play fetch with his stuffed toys. He loves walks and is on watch for all the neighborhood squirrels.”

Rachel added that “He loves attention, likes to ride in the car and has even gone on a short hike. He is curious about everything and eager to run off with my bedroom slippers any chance he gets. He is eating well and is healthy and perky. It is amazing to me that he weighed only 5 pounds when he was found. He is a survivor for sure. I am glad to be his new companion.”

Please visit www.animalalliesrescue.org to volunteer, donate, or adopt. We count on people like you to help these deserving animals get medical care and find their forever homes! Much thanks for your consideration!