AARFily Ever After – Lily, Skippy, Noah, Cinnamon, Taffy, and Shibusa!

CONGRATULATIONS to Lily, Skippy, Noah, Cinnamon, Taffy and Shibusa, who have been ADOPTED! 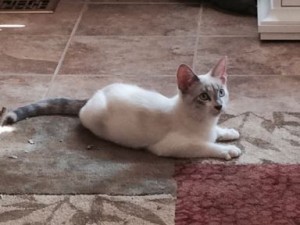 Lily’s story: Lily was one of five newborn kittens who were discovered by AARF volunteer, Bonnie. Bonnie opened her home and took great care of the kittens until families were found to adopt them. Lily was recently adopted and her new mom, Shirley, said that she is doing great. “We have changed her name to Peanut. She is getting along fine with our 1-1/2 yr old cat, Pixie, who we got as a rescue kitten. We also now have a rescue puppy. Peanut and Hope (our new puppy) also get along fine. Peanut is very friendly. Sometimes, though, I think we should have named her Mischief or Trouble! She is very curious and tends to get into everything. We love her very much. She is part of our family,” shared Shirley. 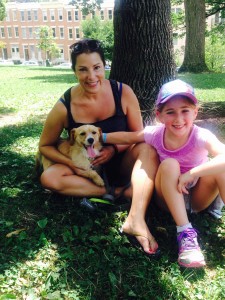 Skippy’s story: Skippy was taken to BARCS after he was found outside without food, shelter or water. Ngi stepped up to foster this high energy pooch and was thrilled to find a perfect match for him! Skippy has found a new leash on life since being adopted by Rachel!  Skippy, now named Waffles, has a very active mom who takes him running a few nights a week around the Inner Harbor and Federal Hill. She told us that “He’s also been hiking in Patapsco State Park and Harper’s Ferry. One of the greatest things about Waffles is his sweet personality. He’s fantastc around children — which helps because I have lots of nieces and nephews who are thrilled to welcome him into the family. Waffles also loves walking around his Federal Hill neighborhood and meeting his neighbors.” She added “Waffles appears to be having a great time. I already had a cat (Aggie), and after some careful adjustment time, she and Waffles are now getting along pretty well.”

Noah’s story: Rescue Well received a call on their hotline regarding a stray cat and four kittens in need of rescue. AARF volunteer Lynn went and picked up the four kittens and fostered them until forever homes were found. Noah was one of those lucky kittens who was taken in and is now in his new home with his adoptive mom, Michelle! She shared that “Noah is doing very well. He is adjusting just fine. I kept the name Noah; It just seemed to fit him well.” 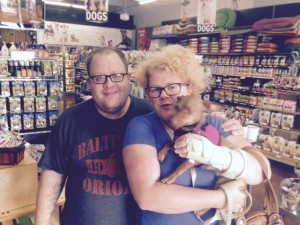 Cinnamon’s story: This adorable Dachshund/Chihuahua mix pup was surrendered to the shelter because her owner was moving. She loved her foster home with AARF volunteer, Bart, but was excited to find a forever home with Mary. Cinnamon is now named Frida and doing well in her new home. Mary shared that “She loves going for walks and exploring her new neighborhood. She has brought a great deal of joy and amusement to her new humans. Frida’s one hope is that her new cat roommates would play with her. Other than that, things are pretty great for Frida.”

Taffy’s story: This six-month old Shih Tzu mix pup was named Taffy by BARCS staff and was such a cutie that she made her way into our rescue. This sweet pup was fostered by Pooches and Purrs and then in the home of AARF volunteer, Barbara. Pam came along and fell in love with Taffy, adopted her, and now her life is nothing less than ‘pawsome’! 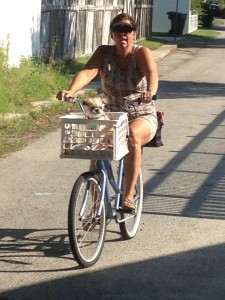 Taffy is now named Sandra Dee and has been living the high life between Lutherville and Ocean City. She had a wonderful summer and has been spotted relaxing and bike riding at the beach. Her new mom, Pam, told us that “The two week shutdown was very useful! It creates a square one for everyone to work from. We restricted her use of the home with use of gates. So it really was us and her for two weeks…and her crate. As she saw us leave the room…she would learn we would come back. All those small things are important. She could quietly see where her food came from (and from who). Her general excitement was limited naturally and if she was calmer…she’d absorb more… and accept direction.” Pam added that “We are thoroughly enjoying her cuteness and affectionate personality. She is generous with lap sitting and not too picky about whose lap it is.” 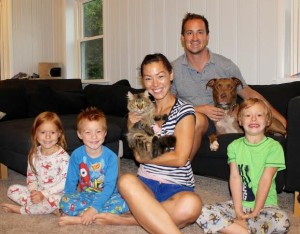 Shibusa’s story: Shibusa was living in a feral colony in Baltimore. She was struggling with outdoor life as she was very thin and underweight. Her long hair was matted. She was trapped and found to be extremely friendly so the rescuer thought she would do better in a home environment. Shibusa joined our rescue and went to foster care with Marisa and her family. It wasn’t long until they decided her forever home was their home! Marisa told us that “We have fostered several kitties through AARF, and while we loved all of them, we never really wanted to adopt any of them until Shibusa came along. We have a busy household with 3 young kids, 2 adults and a medium sized pibble. We weren’t looking to adopt but she has fit in here so well. We love her and we’re so glad she is part of our fun family.”

To find YOUR new furever family member, browse our wonderful dogs and cats available for adoption!