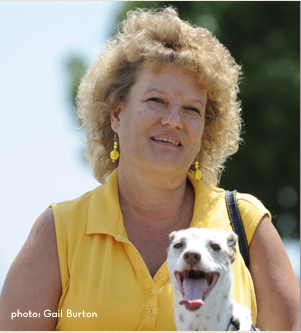 lead volunteers. We’ll be asking them the same questions to learn more about them and how they became involved. Today’s spotlight is on AARF Vice President, Jackie Orwig!

What was your first pet?
Well we had a family pet dog named Queenie, but she was more my sister’s dog. I also used to take in and feed the box turtles that would dig out from my back yard garden every spring, but I guess the first pet that I was given to claim my own was my pet mouse, Whitey (named because she/he was white, of course!)

How did you get involved in rescue?
I was always finding stray dogs when I was young, and even though my parents wouldn’t let me bring them in, I would give them baths when weather permitted and made sure they had access to food and water. I dreamt about actually doing this to the point where I could get them medical treatment and house them until they found either their home or a new home. I never had the room to house them myself until my husband and I bought a home in the county. Then I just went online and searched for places that were looking for foster homes.

What drew you to AARF?
The first rescue that I joined and fostered for was another rescue actually founded by one of the original founders of AARF, Miss SallyAnn Jennings. She brought in another founding member, Arika, but there were many differences of opinions about the way we thought a rescue should be run. Eventually, Arika and Sally left to form AARF and I followed shortly thereafter. It’s been a wonderful journey building up this great organization from the ground up.

What’s your favorite thing about AARF?
I don’t think I have just one favorite thing, other than maybe the people who have helped form this organization and continue to help keep it running. They are some of the most compassionate people I’ve ever met and am so proud to have met them and honored that I can call most of them friends!

Where do you want to see AARF go?
Tough question. I guess I just want us to continue to grow and be able to save as many animals as possible from our overcrowded shelters, from the streets and from unwanted homes, to provide them with whatever medical needs and/or training that’s necessary when others can’t and find them the loving and safe home that they so deserve. To continue educating and enlightening people on the advantages of and disadvantages of spaying/neutering, as well as recognizing and preventing animal cruelty. And there’s always that big time dream of buying a huge piece of land and turning it into an AARF sanctuary. Who knows…maybe one day…